As part of the global Clean up The World campaign, Green Camel Bell, was joined many volunteers in Lanzhou and in Cha Yuan (Longnan, Gansu) in an extraordinary effort to protect and improve the environment for future generations. Volunteers picked up masses of rubbish by the river, in empty fields and in common areas.

Despite torrents of rain local villagers in Cha Yuan joined together on Sunday 18th September to join a rubbish cleaning competition which lasted half the day. The clean up efforts were lead by students from Bi Kou Middle School, with funding and organisation from Green Camel Bell.

Villagers of Cha Yuan collected more than 40 kilos of rubbish and 10 kilos of recycling. A competition to collect the most rubbish was run by the students of Bi Kou Middle School. The students weighed rubbish, organised materials and gave away prizes such as sacks of rice, tins of cooking oil and bags of washing powder. 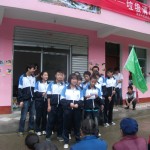 Speaking on behalf of Green Camel Bell, Xiao Xie, expressed her appreciation for the efforts of local volunteers, “Clean up efforts from volunteers have shown that the people of Cha Yuan and the students of Bi Kuo Middle School really do care about the state of the environment, and are willing to do something practical about it.”

Over the past year Green Camel Bell has worked in Cha Yuan to install 8 rubbish rooms for centralised collection of rubbish in the village. Due to inaccessibility for transportation the village previously has not had a rubbish collection system. Until recently waste had been organic in nature and thus biodegradable. Motorbike access is more common now, although the unseal road remains treacherous in the wet, and more plastic packaging and waste has made its way into the village. In the past waste was discarded in fields, streams and around the house. The new rubbish rooms have helped alleviate the sprawl of non-recyclable rubbish and villager education has helped increase the recycling rate for bottles. 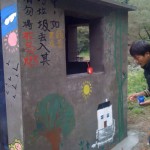 On the same weekend, in Lanzhou – Gansu’s capital, 20 volunteers gathered together at Zhong Shan Bridge to collect rubbish along the banks of the Yellow River.

These events were part of one of the world’s most successful community-led global environment campaigns, Clean Up the World. The campaign involves an estimated 35 million volunteers in 130 countries each year, uniting them in a common goal to clean up, fix up and conserve our environment.

Clean Up the World originated in Sydney, Australia in 1993 and is held in partnership with the United Nations Environment Program (UNEP). The campaign brings together non-government organisations, community groups, schools, governments, businesses and individuals to undertake activities to improve water quality, clean up local streets, parks, waterways and forests and educate children about the environment.
For more information about Clean Up the World please visit :
http://www.cleanuptheworld.org/en/