Our journey begins near a small amusement park in western Lanzhou. Walking along the Yellow River several weeks ago, Green Camel Bell staff discovered a small river running through the park that seemed to drain into the Yellow River. The water in this tributary was odorous, black and filled with garbage. Today, we retrace their steps to the fun park and find the tributary– black bubbles floating to the surface and plastic bags drift lazily in the murky current. The carcass of what used to be a street dog bobbs forbodingly in the morning sun.

We walk to the back of the park, out the heavy iron gates, and up a hill along where the small black river seems to lead. We stop to buy some water on the side of the road, and the shopkeeper informs us that the waste water river flows from the west, over in Lanzhou’s industrial district, several kilometers away. As we hike along the river heading west, we pass car dealerships, a recycling center, and a coal-fired power-plant far up on a hill to the left. As we hike, we notice that the water in the tributary, although still grey with specks of black and bubbles, is decreasing rapidly. When we finally get to what seems like the source of the tributary, we are in a grassy floodplain criss-crossed by a large bridge. Standing at the top of the bridge, we notice that the tributary veers right, into what looks like a trash collection station. 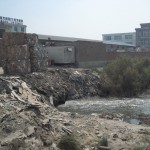 Into the collection station, we find two large pipes spilling grey-and-black speckled water, exactly the same as at the amusement park. A woman who lives across from the sewage pool says that on the rare occasions that it rains, the sewage pool overflows onto her patio, cracking the cement (she gestures to cracks that look like several small earthquakes have hit her front deck). Also, she says that people come regularly at night with trucks to dump waste and trash from other sites into the tributary~ But nobody is watching, nobody is managing this, she says.

Walking back along the tributary, we meet a man who has lived in this industrial area his whole life. He offers to take us to what he says is the real source of the sewage tributary–not the sewage pools we have just seen, but rather to several sites leading to a power plant and a sewage treatment plant that is still under construction.

Driving quickly through narrow mud walls and down alleyways to snap pictures of mountains of trash, electronics, and the polluted tributary, we finally get to a field just half a kilometer from the power plant. Our guide shows us a small trickle of filthy water. Here, he says, is where the polluted water begins its eastward journey. We suspect that the original source is somewhere close to this, but that the company probably has it well guarded, or more likely still, houses have been built over the pipes so that they literally ‘vanish’ from the visual landscape.

From where we stand near the power plant to the amusement park is many kilometers of walking and bus-riding. In fact, it has taken us hours to retrace this sewage river to its source. However, the Yellow River itself is quite nearby. The factory seems to have its own reasons for directing its waste water down such a winding path to the Yellow River many kilometers away.

The man who has been our unofficial guide to the pollution source drops us at the bus stop and speeds away. We seem to have found the source of the smelly black bubbly water~ our Yellow River walk, is complete. For today. Coming back to the site at night time, when the waste water flow is at its heaviest, might lead to still more information regarding this small polluted river.

West Lanzhou is the industrial center, where lots of big enterprises are located and thousands of small enterprises as well. In order to protect the Yellow River, the enterprises should manage their waste treatment, ensuring the whole productive process is managed well and responsibly. Green Camel Bell will follow to find the real source of polluted river, using different strategies and action to make enterprises close down or collect their waste to treatment plant. 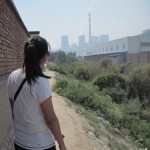