8 hours via bus from Lanzhou lies Maqu in Gannan prefecture, a Tibetan area known
for its rolling grasslands through which the Yellow River snakes. Green Camel Bell
has been working in this community for the past year and a half, aiming to improve
degraded grasslands and engage in social development and environmental education
projects.

Specifically the purpose of the trip is to collect stories from older Tibetans in the
area on conservation practices. From this we are collating the stories into a book
for preservation and study for younger Tibetans and outsiders to better understand
Gannan Tibetans.

I, a native English speaker, am travelling with two GCB staff, one a Cantonese
and Mandarin speaker, the other a local Maqu Tibetan who has learnt Chinese
recently. We have a great time together naming objects in each others languages and
attempting to get our mouths around the guttural sounds non-existent in English or
Chinese. However, at times the conversation becomes a little more tangled when
questions from local herdsmen need to be translated from Tibetan into Chinese and
then from Chinese into English (and back again!).

We interview a number of monks, herding families and also city residents. Many of
the stories are interlinked with religious beliefs, for example;
“We never collect the water from the river with a dirty bucket. It needs to be free
from milk or blood otherwise the river gods get angry”
Yet other stories showed Tibetans deep understanding of their natural world,
“The China Zokor has a little underground nest where it hides a
plant called Potentilla anserina, if you know where the burrow is you can take a small
amount of the plant from inside, ensuring you leave enough for the animal also”
“In the past there were many deer, wolves, bears, snow leopard,
Tibetan antelope, who lived behind the monastery. It wasn’t a safe place to go into the
forest. Now days there has been so many removal of trees for firewood the forest is
disappearing, and with it the home for many of these big animals.” 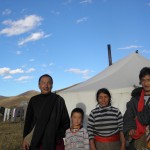 We pitch our tents inside a farmers shed to keep warm, but also to keep safely away
from the enormous and vicious Tibetan mastiffs. I later learn that that is not the only
animal we need to be concerned about. On a walk through the fields one afternoon we
see a large flock of birds of prey. Jinba, our Tibetan colleague, tells us that they are
vultures and when gathered like this it usually means they are coming into feed from
the remains of something a wolf has killed. Running over the neighbouring hill we see
two wolves that have attacked a yak calf by ripping through its neck. A fully grown
yak can fetch up to 3000-4000RMB at market, so it’s a great loss to the herder’s
family. 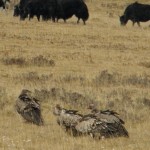 The people in the community live simply as they have to transport all their
possessions when they move from winter to summer camp each year. Their winter
homes have traditionally been made of mud brick, but now some have cement also.
Inside is just one room, which acts as kitchen, living room and sleeping quarters for
the entire family. Most of the villagers cannot speak Mandarin, and have not been
educated past primary school. The women and girls especially do it tough by having
to engage in domestic labour, such as drying yak dung for fuel. As these tasks take up
most of the day, many families do not send their daughters to school. We are hoping
to set up a women run clean energy team. As they already take charge of dung drying,
we want to include them in training for maintenance of newly installed solar panels,
and see what other opportunities for learning we can help provide them with.
Looking forward to my next visit already!