Green Camel Bell recently held the first meeting for environmental organisations in the Maqu area to get to know one another, share conservation experiences, and discuss the issues facing the grasslands. 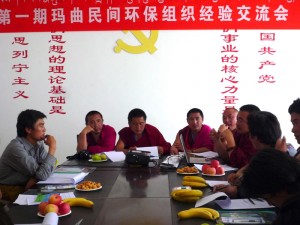 Six grassroots organisations from around the region attended the successful meeting, moderated by GCB. Although many of them were only established in the last 2 years, their real enthusiasm and commitment to the local environment was overwhelming. The meeting heard some well considered discussions about the problems that they need to tackle as a group.

As consumerism and tourism to the area grows, the issue of litter has become one of the worst problems in Maqu. A local resident told me, ‘the most noticeable difference to our land in the last 15 years is the build up of rubbish everywhere along the roads’. As a result, most of the organisations have largely focussed their efforts on clearing litter in their local areas.

The magnitude of the problem lead to a heated debate on approriate waste management in the Maqu. Whilst most believe that incineration is the best option currently available, some groups protested about the pollutants emitted during incineration, objecting that while it may reduce visible pollution, they risked greater harm to the environment.

Unfortunately, litter is not the only environmental problem facing Maqu today. The grasslands are in severe danger of desertification, with patches of desert already visible amongst the fields, and the wetlands are being destroyed. The growing demand for the medicinal Caterpillar Fungus is damaging their ecosystem and reducing food sources for livestock.

A number of more local issues are causing other serious challenges to the simple agricultural lifestyle in Maqu. A Wan Cang is suffering an endemic problem with Pikas: small, rabbit-like rodents that burrows under their land, turning grazing land into unusable, shallow fields of soil.

In Ni Ma there are 6 or 7 gold mines; extraction has meant heavy mercury pollution in the air, and in the town of Wu La there have been rumours that new mines are to be opened.

As the threats to Maqu’s environment increase, it is imperative that interested parties come together to share their knowledge and support one another’s efforts. 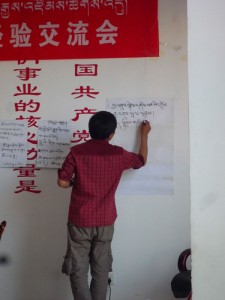 In addition to environmental conservation, the group also discussed conservation of the Tibetan culture.  According to the official 2000 census 51% of the Gannan population are Tibetan, and it has a noticeable impact on the area: almost everyone we see in Maqu wears a Tibetan ‘Chuba’ coat and speaks the local Tibetan dialect.

It is important for the local groups to preserve their customs, religious beliefs and language. Beyond cultural significance, Tibetan folklore has a positive impact on the environment and biodiversity too: children are taught not to harm fish or frogs for example, as doing so will anger the God of Water who can inflict sickness and floods. These beliefs have kept Maqu the beautiful a landscape as it is, but the older members of society see the traditions slowly disappearing.  They hope that greater education of the young could help reverse this, and protect the Tibetan identity.

The meeting was passionate, comprehensive, and hopeful. All of the attendees left with positive feedback for the GCB team, and a clear plan for future meetings which will be held twice a year, focussing on one topic each time.

When asked the question: ‘what is your vision of Maqu in the future?’ the answer was unanimous. Everyone looked to clear blue skies and world reknown natural beauty.

This may be only the first meeting for Maqu’s environmental organisatoins, but the collaborative atmosphere was encouraging. Through their combined effort I am sure that their dream will be realised. 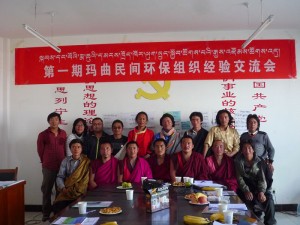 Attendees from the 6 organsations in Maqu, along with GCB staff Jin Ba, Hu Yu, and GCB friend Shao Jun