My name is Annie, I am 54 and a teacher of English in France. I had already travelled to China and to Gansu province before with my son, Guillaume, but this time my husband, Dominique, who is also a teacher and has just retired decided to accompany us. Apart from my husband and my 15-year-old son, we were also travelling with our friend from Chongqing, Mr Zhao. 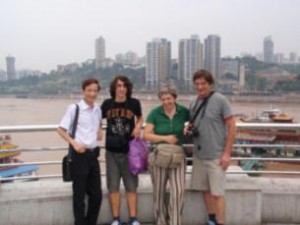 Together with Mr Zhao on our arrival in Chongqing from France
Before I tell you more about our time in the village, I would like to explain something about the languages we can speak. Unfortunately, we only know a couple of words in Chinese and have many difficulties using the right tones, so most people cannot understand us, even when we try… However, we had Mr Zhao to help us. Mr Zhao and I have a language in common, it is not English, but Esperanto. You might not know much about Esperanto, so I have to do some explaining I think… Well, Esperanto is a language which was invented at the end of the 19th century, by a Pole called Ludwig Zamenhof, to be the second language of everyone around the globe… It did not succeed as well as he had hoped, but there are Esperanto groups in many places in the world.
I had already taught English in another village, in 2007, with the help of Green Camel Bell, our aim was to do it again, as a family. We travelled on the train from Chongqing to Xi’an and then Lanzhou. In Lanzhou we went to the Green Camel Bell offices, where we discussed what we wanted to do, explained what we were prepared to do etc… 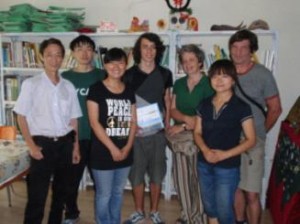 Us being welcomed in the Green Camel Bell office
Less than two hours after we had left the office, we got a phone call saying they had found a village where we could go and teach! So off we went, on the train still. We were picked up from the station in Jiu Quan and taken to the village. In the village we stayed with the family of one of the Green Camel Bell staff. They are farmers. There are 5 people in the household: the grandparents, the parents and the 17-year-old son. The father has a job outside the farm, which means they all work hard, to produce their cereals and vegetables on the farm. We had two rooms for ourselves and we took our meals with our hosts. Most of what we ate was produced on the farm: noodles, vegetables, a little bit of meat.
On our first day, we went to see our “school”, which was a building with a courtyard. The day after, we prepared the room and the outside also, to play sport too. We did not have much cleaning to do because lots of people were already doing it, everyone was helping. 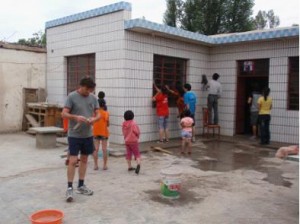 Preparing the “school”
On the Monday, we were all ready to start. The children were ready too. Many children came. Some were as young as 7, others were 17. Everyone seemed keen to learn some English! There were more than 50 children, so we decided to make two groups: we would teach the younger ones in the morning and the older ones in the afternoon.
Everyday new children came. Their parents came to introduce them. Every day, I had to find new English names for new children… Some came only once though! All in all, in each group there was a chore of children, about 15, who came every day for the two weeks we stayed.
Let me now tell you about a normal day: I would be taken to the school by the son of the house, with his motorbike and little trailer at 8. I taught for about 90 minutes, then my husband joined me and took half of the group. With him they practiced table tennis, badminton and darts. We then swapped groups. We went home for lunch and some rest. At 2 in the afternoon, I set off again, my son and my husband joined me after about an hour, we then had 3 groups: one group doing English with me, one group doing sport with my husband and one group being introduced to rock and roll, western music by my son, again, we swapped groups. 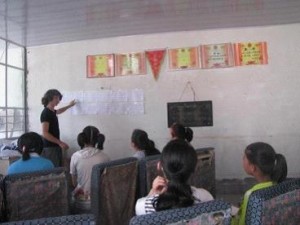 Guillaume teaching, for the first time in his life…
As to the teaching of English, I would like to now focus on the difficulties I faced. Most children (except a few very young children) knew their alphabet in English, that does not mean, however, that they could read!… Many children, even among the older ones, had no idea about how to read English words… I thus had to spend some time on reading tasks, with sort of flash cards, labels, made by my young helpers (several young people helped me, their English was quite basic, but they were very friendly and always trying to do their best). The fact I was trying to get them to ask questions, communicate was also something which was not straightforward: the children are used to choral repeating in their English lessons, communicating was in fact something new for them and although some showed me their books with quite a lot of words they were supposed to know, they had never used them to communicate. Another problem I faced was the lack of interest that some children showed… Several of them came because (I am just guessing…) their parents wanted them to or because they wanted to play with their friends… So, I think preparing in advance, informing the families in Chinese, so that everyone knew what the teaching was about, why and how would have helped me to make sure my teaching was really efficient. At least, now I have a clearer picture of what the children’s difficulties are. 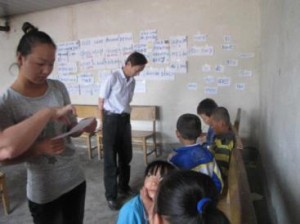 Mr Zhao and one of my young helpers with some children from the morning group
We stayed in the village for two weeks, we had brought a bread machine, which we left for our hosts to use and on the last day we also made bread for the children, which I think they liked. We learnt about life in the country. For us that was a great experience. It is a pity I can’t ask the children about their opinion of these two weeks! 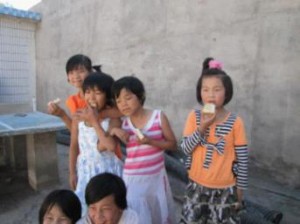 The last afternoon, Guillaume had brought his saxophone