Ah Gan Zhen is a bleak coal-mining town close to central Lanzhou, largely unvisited and unknown by the residents of the city. Although it is a small town it endures terrible pollution from a variety of sources. A Green Camel Bell staff member and 2 volunteers went to survey the residents about the coal pollution in their town.

Coal mining first began in Ah Gan Zhen during the Ming Dynasty and has continued to this day. Large-scale industrial mining was introduced in the 1950s, increasing productivity but depleting the town’s coal reserves.

Ah Gan Zhen had proven reserves of over 5,760 million tons of coal of which 4,378 million tons have been mined to date*. It is projected that the coal resources can only be maintained for another 10 years if mining continues at the current rate of 30 million tons per year.

The town is reinventing itself to find sustainable revenue, investing in the agricultural and tourism industries. Forests, temples and beautiful scenery are all easily accessible from Ah Gan Zhen, making it an ideal base. However, with current levels of pollution, attracting tourists won’t be easy. 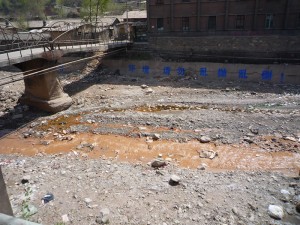 The river in Ah Gan Zhen, which flows into the Yellow River

My first impression upon arrival was of a forgotten industrial town. Bridges span a thin ochre stream, where there should be a river; the riverbed is flowing with plastic bags and rubbish; further heaps of waste are incinerated at the sides of the road, covering parts of the town with a thick noxious plume; old apartment buildings billow yellow smoke. Ah Gan Zhen has been consumed by its industrial industry without regard for environmental quality.

After digesting their surroundings, Green Camel Bell’s team of 3 set about surveying the local residents about the effect of coal pollution in Ah Gan Zhen. We interviewed a total of 30 residents, ranging from 15 to 80.

Two-thirds of the residents thought the main causes of pollution were coal and waste incineration, reflecting what we had seen in the town. There was a consensus that coal was the most polluting energy source, with respondents answering that it affected air quality (23/30), human health (22/30) and water quality (14/30). Of the 30 people questioned, 29 believed that burning coal as an energy source gave them breathing difficulties.

Two women we spoke to agreed that pollution in the town is severe, but shrugged, ‘we’ve lived with it for so long that we’re used to it.  For us, it’s just a fact of life’. This attitude demonstrated the attitude of the townspeople at large: there was little interest in changing habits to reduce pollution.

As coal resources deplete Ah Gan Zhen will need to find a new, hopefully greener industry to sustain the town. With more information and community education perhaps the residents will look to improve their own environment, for their own health and for the good of their town.